Travelling from outside of Gauteng for your health care? We'd like to help

Please let us know a bit more by completing this survey so we can offer a concierge service to our valued patients coming for care at Wits Donald Gordon Medical Centre.

We're looking at offering travel, accommodation, restaurant bookings and even facilitation grocery shopping, dietary requirements and leisure activities if you are visiting Johannesburg for health care. Why not take the hassle out of healthcare and have some healthy fun too?
Email ThisBlogThis!Share to TwitterShare to FacebookShare to Pinterest

Heart Disease root causes - and the tests that can save your life ! #LCHF — The Fat Emperor

Fear of Breastfeeding when living with HIV 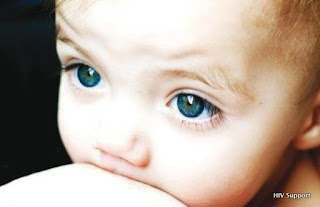 Breastfeeding is an emotive issue . Everyone has an opinion on whether breastfeeding is best and whether formula feeding is ever as good.  Mothers who breastfeed are judged , mothers who formula feed are vilified. There are social, behavioural, cultural, religious and medical factors that weigh in on how you perceive what is best for your baby. For any new parent, navigating the sea of opinion and unsolicited advice can be very difficult, without having to consider HIV. When we add HIV to the mix, the judgments amplify and fear dictates decisions.

In my practice,  I work with a number of couples from pre-conception all the way to infant HIV care. It's one of my favourite things to talk about because I am passionate about it. I have two children, one who was breastfed and one who was formula fed. I know first hand how difficult it can be to establish breastfeeding and how little support there is out there for breastfeeding mothers. It means a lot to me that my patients are offered support in this decision, and that they have no regrets 2 years down the line.

Couples faced with the decision whether to breastfeed or not, arrive at my offices with a ready made decision to Formula feed. Most of the time the decision has been made based on FEAR. No mother wishes to pass HIV on to her baby. And the 'professional opinion' and fear based advice out there abounds. 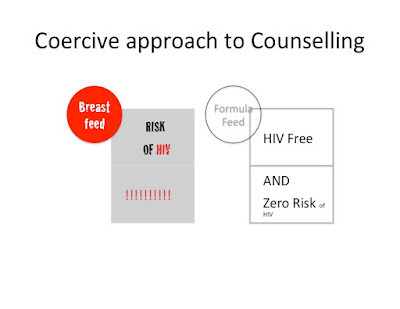 Many Obstetricians, GPs, Paediatricians and midwives advise against breastfeeding because the "risk is too high". But are all these specialists able to quantify or qualify what the actual risk of HIV transmission is? It is unacceptable to me that this coercive approach is taken instead of offering full information, including the pros and cons. We call this informed decision making. 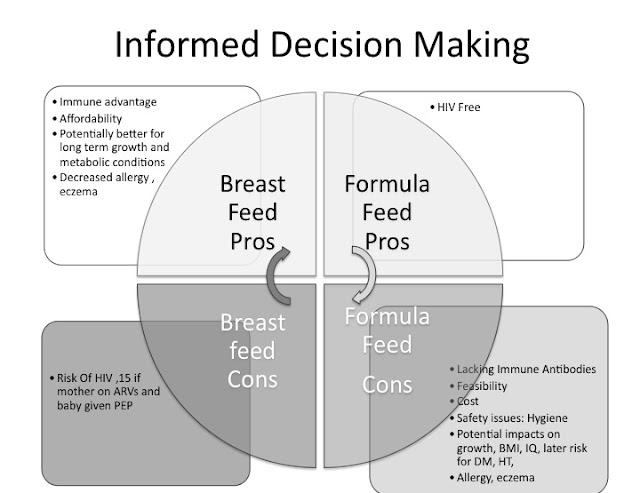 Why are people afraid to Breastfeed if HIV positive?

In short: because they wish to eliminate risk.

What is the risk of HIV transmission through breastfeeding? 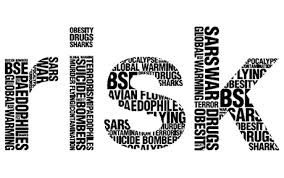 To understand the risk better it is necessary to look at a study. The study below really highlights the pertinent issues. Skip the images if you can't bear the detail, but read the text.

In this study 279 Women were  also given ARVs while pregnant. All were encouraged to Exclusively Breastfeed for 6 months. From 6 m to 12 months age, they breastfed and gave complementary foods. They stopped breastfeeding 13 months. The table below shows that
after 6 weeks NO infant had acquired HIV through breastfeeding! 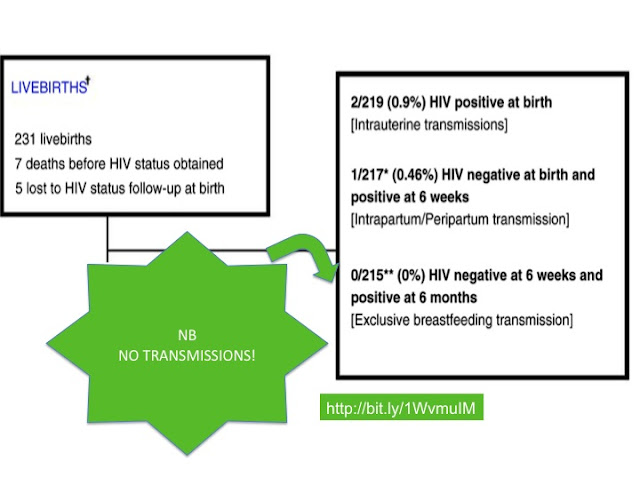 And interestingly, after 12 months there were 3 infected babies. But, each case was linked to a high viral load in the mother. This means that after a year, if the mother demonstrated successful ARV treatment with a low viral load, there were no children infected with HIV. ( see image below) 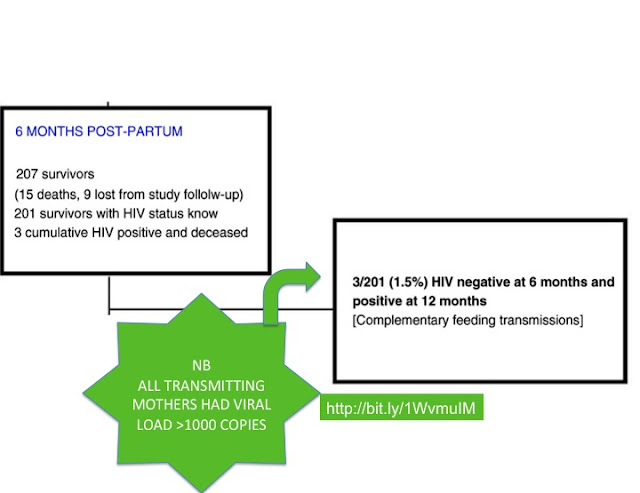 It is a gold standard to promote exclusive feeding, but did this really happen in these mother infant pairs? At no single point in time were all the mothers exclusively breastfeeding. (see graph below) 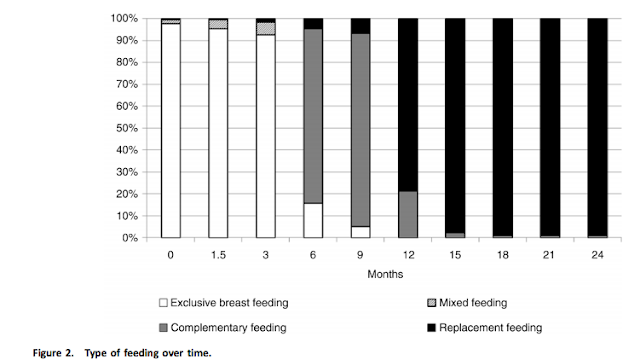 Exclusive Breast Feeding
Only Breast milk (either expressed or directly from the breast but definitely breast milk) is given. No water, No formula top ups, no porridge and no solids given. This is recommended by the World Health Organisation for the first 6 months of life. (However, it is also important to note that there is flexibility between 4 and 6 months of age to assess whether the infant is now ready to add additional foods other than breast milk)

Complementary Feeding
When breast/formula milk is still given but it is now age appropriate to add in additional foods, like vegetables, solids, tea, water. Age appropriate refers  to the infants gut maturity and its ability to now safely digest different foods of different textures and other contents. It also means that the infants brain has developed sufficiently to coordinate chewing and swallowing. It is a natural progression because milk alone is no longer sufficient to provide all  the infants nutritional needs.

Mixed Feeding
Mixed Feeding is Inappropriately including foods other than Breast Milk (or Formula Milk ) at a time when the infant's gut is not mature enough to be able to digest these foods. Commonly, in South Africa, cereals get introduced within the first few weeks of life. These foods have a much coarser texture and can cause microscopic tears in the gut. These food may also trigger an immune response in the infants gut that makes the infant more susceptible to illness, allergy and later metabolic conditions. It is important to understand the difference between Mixed and Complementary feeding. 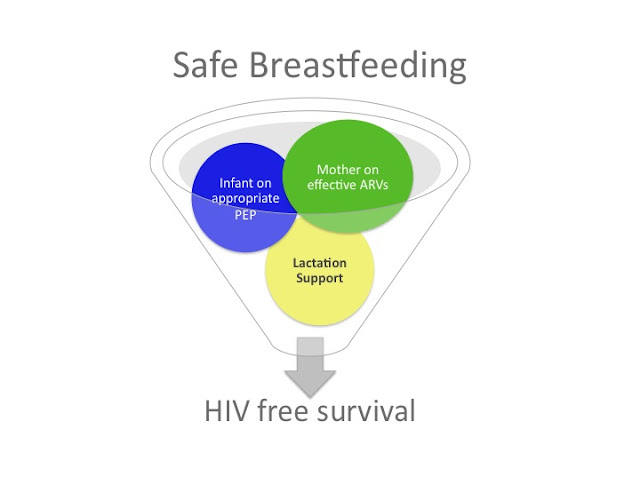 What does this study is tell us?

When mothers were treated with ARVs effectively to a viral load less than 1000 copies/ml then there were NO HIV infections. AND, most mothers introduced other foods before 6 months but no infections occurred. Pretty cool neh? 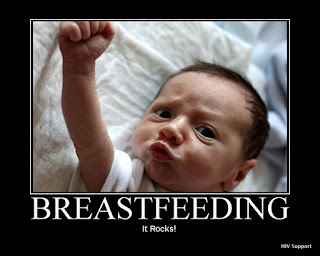 No one can ever give you a guarantee that your baby will be HIV negative. But taking ARVs gets you as close as is humanly possible to eliminating risk to the baby.

Breastfeeding can offer a phenomenal amount of benefit to baby, and to mum. My agenda is to ensure that the word gets out, and to ensure that mothers get a Choice. A choice to take ARVs, a choice in how they deliver the baby, and to choose how they feed their precious child. 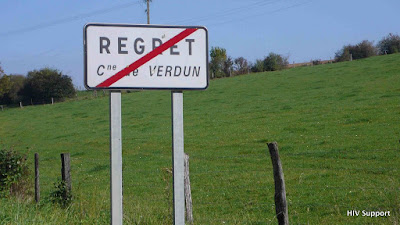 2 comments:
Email ThisBlogThis!Share to TwitterShare to FacebookShare to Pinterest

The Road to Diabetes and Heart Disease The Ticking Clock & Hypothesis

This is an excellent blog written by Dr Axel Sigurdsson, a Cardiologist. Well worth the read and relevant to those with lipodystrophy from ARVs and abdominal obesity (caused by Efavirenz and Aluvia in particular)
http://www.docsopinion.com/2015/08/04/the-road-to-diabetes-and-heart-disease-the-ticking-clock-hypothesis/

Personally I think the benefits of the flu vaccine are being overstated. A maximum 60% protection is reported (ie 60% of vaccinated people who presented with influenza symptoms test negative for influenza) but in this season's analysis it was 19% .

These offer better protection than the vaccine.  And that is before we talk about herd immunity. More than 80% of a population must be vaccinated to gain the proposed benefits of herd immunity.  1.usa.gov/1euUQHF. . In south Africa I believe our uptake is <1%.
http://1.usa.gov/1euV2q8

At my hospital there had been a drive for health care workers to be vaccinated, especially with two cases of influenza A pneumonia in the ICU. However, the evidence for HCW to vaccinate is low quality bit.ly/1euVe8T

Indeed,not all flu vaccine skeptics are anti-vaxxers. I am a believer in childhood immunisation.  But the flu vaccine doesn't have good quality evidence to back it. As in a recent BMJ article there is certainly enough doubt to raise healthy debate. http://www.bmj.com/content/349/bmj.g6182/rapid-responses
And the Cochrane Collaboration also released summaries of the vaccine use in children and healthy adults as well as those over 65.
http://www.cochrane.org/CD001269/ARI_vaccines-to-prevent-influenza-in-healthy-adults
http://www.cochrane.org/CD004879/ARI_vaccines-for-preventing-influenza-in-healthy-children 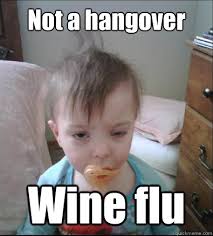 As with most things in medicine I think there is more than one way to view the evidence.And increasingly people are becoming aware of the cognitive dissonance that is pervasive in modern medicine. This is where we have a belief that something is true and so will look for evidence to substantiate the belief and discard evidence that negates the belief. bit.ly/1Uo25lC
http://journals.plos.org/plosmedicine/article?id=10.1371/journal.pmed.0020124

Its a very personal decision  but I don't think people should be reprimanded for not getting a flu vaccine.
9 comments:
Email ThisBlogThis!Share to TwitterShare to FacebookShare to Pinterest
Older Posts Home
Subscribe to: Posts (Atom)